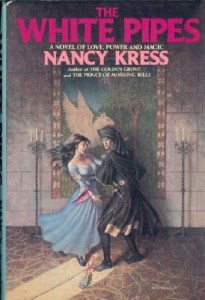 Fia, the Storygiver, had come to the backward kingdom of Veliano to practice her special art. In the mist that swirled between her hands, her mind formed tiny figures to act out simple folk tales for the entertainment of the lords and ladies. But in the court of King Rofdal and his third Queen, Leonore, the story forming in the mist became a tale of twisted passion and shocking betrayal… for waiting in Veliano was the man Fia both loved and feared. Waiting was a web of intrigue to trap her in a struggle for ultimate power – a magic linked to the dark legend of the White Pipes… the secret instrument of Fia’s fate, and the fate of all she held dear.