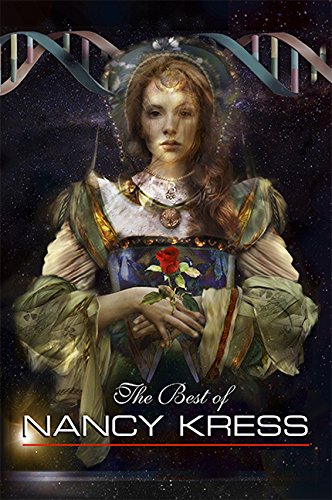 Twenty-one stories, written over forty years and representing the best of Nancy Kress’s fiction. Contemporary fantasy, hard science fiction, sociological science fiction, and the odd unclassifiable. Three of these stories have won the Nebula, the Hugo, or both, and another four were nominees. The gorgeous cover, representing Anne Boleyn in “And Wild For To Hold,” is by Tom Canty.

The stories range through space and time. Anne Boleyn is snatched from her time stream–with unexpected consequences for two worlds. A far-future spaceship brings religion to a planet that already harbors shocking natives. People genetically engineered to never need to sleep clash with those who do. A scientific expedition to the center of the galaxy discovers more than anyone bargained for. A woman finds that ”people like us” does not mean what she thinks it does.

“The much-lauded talents of SF and fantasy writer Kress (Yesterday’s Kin) are finely showcased in this sparkling and thoughtful collection of 21 short stories…. Kress’s strongest work focuses on the razor-sharp edges of science ethics and family dynamics, as in “Pathways,” “Dancing on Air,” “Margin of Error,” and the phenomenal “Beggars in Spain,” still powerful and visionary nearly 25 years after its original publication. Kress has a gift for focusing on the familiar and the personal, even in the most alien settings. This collection will fire the imaginations of new readers and longtime fans alike.”
–Publisher’s Weekly

“Theodore Sturgeon used to append to his autographs a Q-pierced-by-an-arrow glyph that stood for ‘‘Ask the next question’’ – advice that would seem to be particularly apt for writers of science fiction. The phrase ought to be the motto on Nancy Kress’s escutcheon. (Appropriately enough, she has won a Theodore Sturgeon Memorial Award.) Kress can be relentless and even merciless in the posing of next questions… What strikes me about this volume – 21 stories from more than three decades of production – is how Kress’s sensibility remains intact across the range of science-fictional subtypes she employs. She remains always an observational writer who manages to get inside her characters’ skins – working stiffs or middle-class moms or heiresses or narcissistic nobles. “
–LOCUS