Winner of the Nebula Award 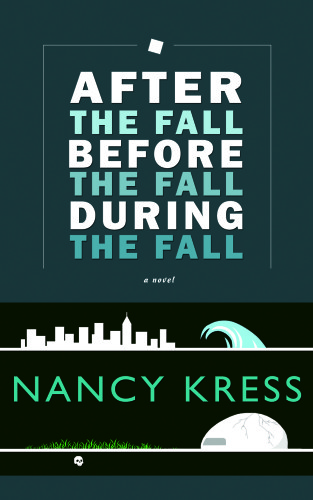 In 2035, all that is left of humanity lives in the Shell. No one knows why aliens attacked in 2014, devastated the environment, and nearly destroyed humanity. Or why the aliens imprisoned twenty-six survivors in a sterile enclosure built on the barren remains of the Earth. But those survivors are determined to not only survive but to flourish, no matter what that involves.

In 2013, the catastrophe has not yet struck. But FBI-consultant Julia Kahn has her own, personal catastrophe, as well as an unsolved string of child abductions to solve.

Something is happening, in slow motion, with large manifestations and small, unstoppable. But no one knows what, or who is responsible, or what should be done. And everyone’s guesses are wrong.

Reviews of AFTER THE FALL, BEFORE THE FALL, DURING THE FALL

“This isn’t the usual post-environmental apocalypse/alien invasion survival book…. Readers of science fiction and those interested in environmental issues will question the current wisdom about our environment and climate science, as well as how much effect humans may—or may not—have on the future.” —School Library Journal

“After the Fall, Before the Fall, During the Fall is a highly intelligent, sublimely understated glimpse into humankind’s future—it’s comparable in thematic impact to Walter M. Miller, Jr.’s classic A Canticle for Leibowitz, and that is saying something. Simultaneously disheartening and inspiring, this novel’s ultimate power is very much like the mega-tsunami referenced within its pages—you won’t see it coming, but when it hits you, you will be swept away.”
—Barnes & Noble.com

“Nancy Kress packs a lot into a short novel of alien invasion, time travel, and ecological disaster…Kress makes us care about the characters as well as the fate of the whole planet.” –Denver Post

“Kress succeeds in tackling major themes—societal responsibility, the stewardship of the planet and mother love…. Recommended.” —The Guardian, U

“Superstar SF and fantasy author Nancy Kress returns with After the Fall, Before the Fall, During the Fall, an elegant novella that combines several wildly different science fiction ideas into a tight package. There’s a little bit of everything here: time travel, hard science, environmental collapse, aliens, post-apocalyptic dystopia. It may sound hard to combine all of these in such a short format, but Nancy Kress makes it work.”
—Tor.com

“This story, of the terrible choices people must make in the face of ecological catastrophe, asks wrenching questions—‘What does it take to remain human? What is survival worth?’—and answers with the authority that Kress always brings to bear on both science and humanity.”
—Nicola Griffith, author of Slow River and Hild